Chat with us, powered by LiveChat
You are here:  Home » What’s Inside The Basics—and Why They Exist

The importance of a record label agreement is hard to overstate, as it can be the make or break point of an artists career. So it is clear why it is so crucial to sign a fair contract that is understood and agreed upon by all parties involved.

The Purpose of the Agreement

Though there are many types of contracts signed by artists in relation to record companies, the most common is a recording contract. In its most basic form, this obliges an artist to make a record for the record label, and includes provisions stating what the record company will do for the artist to help ensure success. This can mean paying for the record (at least initially), promoting the band and booking tours, though this is by no means an exhaustive list of what the record label will do for an artist.

The importance of a contract in all of this is pretty obvious, but what should be emphasized is that artists should know what kind of contract they are signing before pen is put to paper. Most have heard the horror stories that can arise from one-sided record company contracts that leave artists not only without the career they dreamed of but, all-too-often, in debt to the record company with no way out.

Additionally, as the record industry is continually evolving to stay relevant in today’s ever-changing music industry, new types of contracts are often being drafted to accommodate a shifting business model. One new type of record label agreement that has emerged in previous years is the 360 deal. In the past, most record contracts agreed that the record company would advance the artist money to record an album, and then take a share of record sales to recoup that advance, as well as make money on all record sold after that point was reached. A 360 deal, however, typically finds a record company receiving income from not only record sales, but also other aspects of an artists career, such as touring and merchandise.

With record companies looking for new ways to make money in the face of constantly declining music sales, artists should now more than ever ensure that they understand the record label agreement they are signing and that they are getting a fair deal.

The trend of 360 deals, also known as multiple rights deals, has stirred up a lot of controversy in recent years. Criticism of this type of deal usually points to the fact that young bands are unfairly put into these deals to get a record released, but then the record company perpetually has a hand in the band’s proverbial pocket, making the success of the band much harder to come by. What’s not looked at as often, however, is the fact that established artists also are signing these deals.

In 2007, Madonna signed one of the biggest recording contracts of all time with Live Nation, reportedly worth about $120 million over 10 years. The deal promised the Material Girl millions of dollars worth of advances on future recordings as well as a signing bonus estimated at $18 million. However, since the agreement also granted Live Nation exclusive rights to promote subsequent tours, here’s the list of the aspects of Madonna’s career Live Nation will receive royalties from: albums, tours, merchandise, the Madonna brand, web site and music related film projects, among others.

With the amount of money given to her by the agreement, giving up portions of royalties for these aspects of her career may not be a big deal to Madonna. She was quoted as saying the deal was part of her changing with the music industry. For a young, non-established band, however, this type of contract could mean the end of a career if they are not sure that the contract they are signing will help them in the long run.

The Contents of the Agreement

By now it’s probably pretty clear that there’s not just one standard record label agreement that is used by everyone. All relationships between artists and record companies are forged independently by the parties involved to be, hopefully, mutually beneficial. With that said, however, there are two mainstays that will present in nearly every record contract.

Obviously this is the section of the contract that will describe exactly what the contract covers. Additionally, it will stipulate how records are to be recorded, who owns those recordings, and if the record company will have a hand in paying for (and ultimately receiving revenue from) other aspects of an artist’s career.

Here the contact will stipulate exactly how money will change hands between artist, record company and whatever other parties are involved in the artist’s career. This section will contain all the dollar amounts and percentages that are involved in the finances between the artist and record label. Obviously, this will be a very complex section and will need to be thoroughly understood by everyone signing, usually with the aid of a lawyer.

Though everything will be grouped into far more than two sections, these two categories form the basics of all the clauses contained in a record label agreement. Most of the rest of the content will be further explaining aspects of these two clauses. 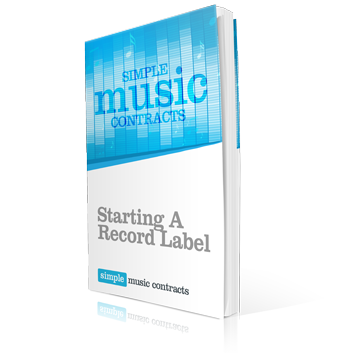